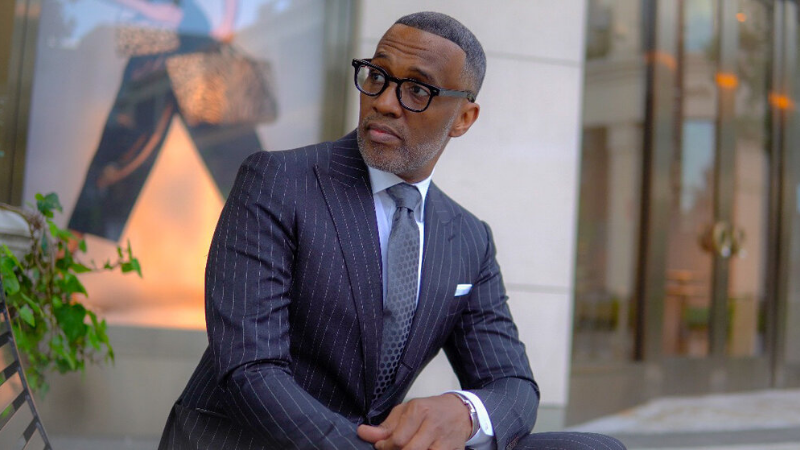 Kevin Samuels Net Worth: Kevin Samuels was an American-based YouTuber known as an Image consultant, life coach, dating expert, and fashion advisor whose net worth was $5 Million as of 2022. People loved him for his innovative fashion tips, especially for Black people.

Samuels was also famous because of his controversial statements and videos on anti-feminism.

Kevin Samuels’ birthdate was March 13, 1965. His birthplace was Atlanta, Georgia, a state in the US. Samuels had an incomplete childhood as his parents divorced after a few years of his birth. He grew up with his mother in Oklahoma and told in an interview that he was more close to her.

Although he was a chemical engineer, Kevin was passionate about fashion and personality development from his childhood. Thus, he switched his career and started gaining experience in this field.

Kevin Samuels started his career in 2005. He got a job as a business consultant and manager at Home Depot. He worked there for three and a half years but later quit because he received a better opportunity.

In 2009, he joined Super media and worked as the brand’s advertising agent for two years. From here, he gained experience understanding clients’ personalities to lure them into buying what he was selling.

In 2013, he worked in The Real Yellow Pages, an advertising firm, as a publicity consultant. His ability to understand his client’s demands and deliver them what they want made him one of the best employees.

Later in 2015, he created his YouTube channel “Kevin Samuels” but didn’t post till 2016. In 2016, he published his first video. His channel contains motivational videos, life-spending tips, fashion advice, and dating issues. The titles of his views were attention-seeking, like “A world without Men,” “Are Modern Women doomed?”, “Do women want more than they deserve?” and many more.

Kevin also remained in a feud with women appearing as guests in his videos because of his anti-feminism video content. Most YouTubers also made reaction videos against him.

He was an anti-feminist who thought that men have higher values and are supreme, and thus can have more than one wife if they want, while women are submissive and don’t have any right to choose their partner. He was against women selecting a partner of their own choice. This statement made him a pivotal point of controversy.

Kevin Samuel also started a business. He opened his showroom named “Life and Style by way of Kevin Samuels,” in which he gave grooming tips to his viewers. He mainly provided styling tips to Black women. Samuels also addressed life and dating issues and offered solutions to solve them. He also gave corporate advice to brands and businesses.

Samuel had also started an online program to advise persons who can’t visit his showroom like his international fans. He hosted online meetings with them to guide them in their life.

Kevin used to charge almost $ 10,000 for image consultation. He had an account on LinkedIn where his all information is available. People would book an appointment with him, and he charged them traveling expenditures and fees.

He had also written a book titled “Kevin Samuels dating advice for Women: The things you need to know from Women’s Perspective,” which is available on Amazon.

Kevin Samuels gained his primary education from a local school in Atlanta, but he attended Milkwood High School in Oklahoma for high schooling. Later, he got admission to the university and earned a degree in Chemical engineering from a prestigious university in Oklahoma.

Kevin Samuels’s mother and father’s names are unknown. His parents divorced when he was young, and his mother got his custody. They shifted from Atlanta to Oklahoma.

Kevin was very close to his mother, and she appeared in his TikTok videos, while his father remained absent during his growing years.

Samuels never talked about his siblings in any video or interview, which hints that maybe he was the only child of his parents.

Kevin Samuels’s marital status was divorced. Everyone thought that dating expert Kevin Samuels would have a smooth life and ever blossoming relationships, but the reality was the opposite. He was a victim of two failed marriages.

His first marriage was to his high school sweetheart. Their marriage didn’t last long, and he divorced her maybe one or two years later. The couple has a daughter together, whom they welcomed on June 29, 2000. Kevin kept her name private, and they both shared her custody.

Samuels’s second marriage was also not successful, and they got divorced after a year of their marriage. They both don’t have any children.

Earlier, a rumor arose which said that Kevin Samuels’s girlfriend was a 30-year-old Instagram Influencer sixthegoddis, as he posted a picture of them together. The model was married but later divorced, and people speculated him to be the reason for their divorce. Kevin responded that it was a false rumor and the matter died down.

Kevin Samuels’s girlfriend was Brittany Renner. She is also an Instagram model. Brittany also has a son from her ex-boyfriend.

On May 5, 2022, a friend of Kevin, Melanie King broke the news of Kevin Samuels’ death on social media. The news had spread on social media like wildfire. First, his fans thought it was just a piece of fake news with no confirmation from his family but later that day Kevin’s mother Beverly Samuels confirmed the death of Kevin Samuels. Kevin died due to a heart attack.

Kevin Samuels was living a luxurious lifestyle. Kevin had a grander house which he built through his hard-earned money.

He also had a property showroom in an exclusive area in LA, California, while he owned cars like Bentley and Rolls Royce in his collection.

Kevin Samuels net worth in 2022 was $5 million. His primary source of income was his YouTube channel. He generated a lot of money through it. He also earned tremendously through his showroom and his corporate business. Kevin’s monthly income was around $42,000.

Who was Kevin Samuels?

Kevin Samuels was a motivational speaker, life coach, dating expert, and fashion advisor who died on May 5, 2022.

What was Kevin Samuels’ worth?

Kevin Samuels’ net worth was approximately $5 million as of 2022.

On May 5, 2022, a friend of Kevin, Melanie King broke the news of Kevin Samuels’ death. According to close sources, the cause of his death was a heart attack.

How old was Kevin Samuels?

How tall was Kevin Samuels?