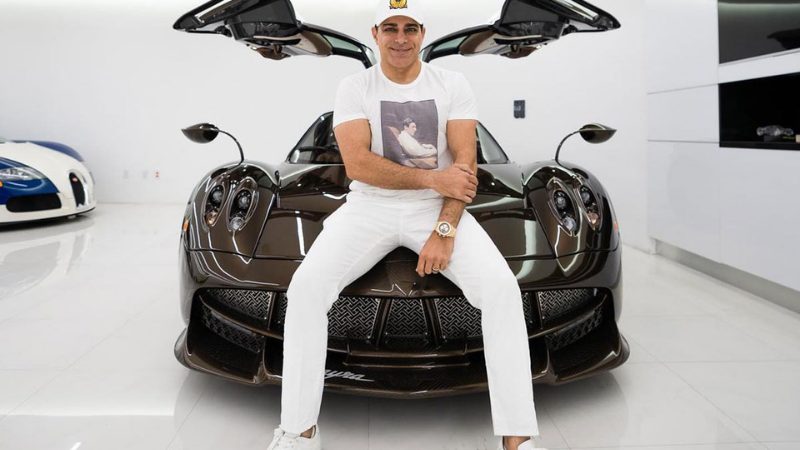 Khoshbin is also an author and Youtuber. He shares how to be successful and money-making techniques with his followers through his YouTube channel and books. Now let’s talk about Manny Khoshbin’s net worth, income, annual earnings, career, personal life & biography, and how he earned such a hefty amount of wealth.

Manny Khoshbin was born in Iran, but he and his family shifted to America at the tender age of fourteen. His family was not financially stable, due to which he had to work part-time along with his studies. Khoshbin’s first job was at Santa Ana K-mart, where he worked as a labor clerk, but later, he shifted door-to-door marketing platform and worked as a sales agent.

Manny, during his high school years, opened a company. He would buy nuts and other dry fruits, repackage them, and sell them under his company’s label, but later, he had to shut it down because Khoshbin did not have enough money to pay for permit pass as his company was not able to make any profit.

Manny Khoshbin gained his primary education in Iran, but when he with his family shifted to America, he attended Westminster High School. Later he got admission into college, but two weeks later, he dropped out of college because he wanted to earn money quickly, and the college was not teaching it to him. After dropping out, he started his own company.

After completing high school, Manny decided to enter the business arena to be a successful businessman. In 1991, Khoshbin invested all his savings in a company encouraged by his father’s friend, but the company turned out to be a fraud, and he lost all of his salvation. But he didn’t lose his courage and decided to venture into the real estate field. He worked very hard to get a real estate license and succeeded after six months of arduous work.

Along with acquiring a license in the real estate business, he started working in a mortgage company as a loan officer to earn some extra dollars. He gained experience in the market and created his own company, whose function was to give loans to other companies for six months. Khoshbin’s this business achieved ultimate success, and he succeeded in earning lots of profit through it. This success coined his name in the industry, and he started collaborating with other companies to expand his business.

After the success of his first company, Manny created his second company by his name in the Orange country of California. This business was into Real Estate, which provided the facilities of acquiring, managing, and repositioning Value-Add Class A and Class B retail and office properties to its clients.

The Khoshbin Company, for more than twenty-five years, has been acquiring Value-Add properties in selected and mellow markets. One of the company’s salient features is that it reduces general expenses through hardcore administration, increasing its worth. The company recognizes the property’s ability by enhancing its appeal, renting it fully to financially well-off tenants, and estimating its total cost by boosting the property’s enchantment using hands-on management strategies mixed with skilled and professional property managers.

Khoshbin is also an entrepreneur and has invested in several other businesses aside from his companies and is earning tremendously through it.

Manny Khoshbin is also a social media sensation. He is very active on his social media accounts. On February 8, 2015, Manny created his YouTube account. Through his YouTube channel, Khoshbin shares the ways to be successful with his subscribers and viewers. He also shares other videos related to entertainment on his channel. Manny has a huge fan following on his account. He also has millions of followers on his Instagram account, where he shares his daily life with his followers.

Khoshbin is also an author. He has written a best-selling book in 2018 titled “Driven: The Never Give-up Roadmap to Massive Success.” The book encourages its readers to follow their passion. Failure is a part of life; despite wasting time in self-pity, learn from it and continue working for success. The book received a tremendously positive response and was loved by many people.

Khoshbin comes from a big family. He has four siblings. Manny’s brother’s name is Mahirehan Khoshbin. Any information regarding them is also not available, but it is a fact that Khoshbin shares a harmonious relationship with all his family members.

Manny Khoshbin’s wife is Leyla Milani, an Iranian-Canadian model, actress, entrepreneur, and television host. They met through Facebook, and then after years of dating, the couple got married in 2011 and has two children, one son, and one daughter.

The couple’s relationship is harmonious, and there are no signs of divorcing each other.

Khoshbin’s daughter is Priscilla Koshbin, their first-born kid they welcomed in 2012. Manny’s son is Enzo Pasha. He is a family man and cares for his wife and kids.

Manny Khoshbin is living a very luxurious life. He lives with his family in his grandeur mansion in Newport Coast, California. Khoshbin’s house worth is approximately $9.975 million. Manny also owns a luxurious collection of cars in his garage. Khoshbin’s car collection worth is $30 million. His car collection includes; Rolls Royce, Mercedes limited edition G-wagons, Porsche, Ferrari, Bugatti Chiron, and many more. Manny was also featured on the magazine’s cover page for his exclusive car collection.

Manny Khoshbin’s net worth in 2022 is $80 Million. His primary source of income is his business career. He generates a significant amount of money through it. Khoshbin also earns tremendously through his writing career and social media accounts. His other sources of earning are brand advertisements. A considerable part of his net worth comprises the money he gets from the businesses he invested in as an entrepreneur.

Manny Khoshbin is Muslim nominally. He doesn’t follow Islam and says that he is non-religious.

What does Manny Khoshbin do?

Manny Khoshbin is an author, entrepreneur, and YouTuber. He is the CEO of the company he owns and an entrepreneur; and invests in several other businesses, writes books, and posts videos on his YouTube channel.

How much is Manny Khoshbin worth?

How much does Manny Khoshbin make a year?

How many properties does Manny Khoshbin have?

Manny Khoshbin has a lot of properties. He owns assets of approximately $50 million.

How old is Manny Khoshbin?

How tall is Manny Khoshbin?

Where does Manny Khoshbin live?

Manny Khoshbin lives in his mansion in Newport Coast, California, with his wife and kids.

Where is Manny Khoshbin’s garage?

Manny Khoshbin has a garage in his mansion on about 70,000 sq. ft with a private track.