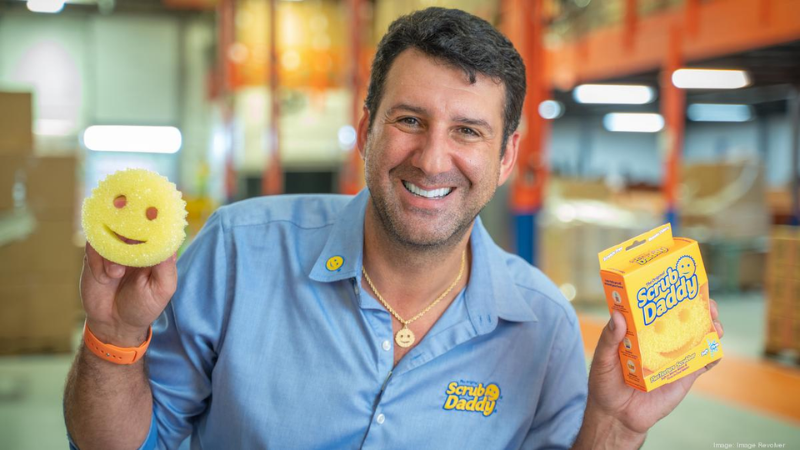 Scrub Daddy Net Worth: Scrub Daddy, a cleaning company founded by Aaron Krause, renowned for its iconic cleaning sponge, designed to resemble a cheerful smiley face, has a net worth of $250 million as of 2023. The company produces a wide range of cleaning products that make tidying up easier.

Scrub Daddy, Inc. was founded in 2008, and 2012, its grassroots marketing was featured on the Shark Tank episode, which originally aired in October of that same year. Lori Greiner was so impressed with the product that she made a 20% equity stake deal with Krause for $200,000. The following day, the sponges sold out in under seven minutes on QVC, and Greiner then helped to make them available in retail stores such as Bed, Bath & Beyond.

Now let’s discuss Scrub daddy’s net worth, annual revenue, CEO of Scrub Daddy Aaron Krause’s net worth and how he made such a big cleaning company.

How much are Scrub Daddy Net Worth and Annual Revenue

Scrub Daddy, the original product, is sold in over 55 online and in-store retailers, bringing in an annual revenue of $175 million for the company. This, alongside its other products, provides a stable source of funds, with each item costing around $4, which makes an estimated Scrub Daddy net worth of $250 million.

Aaron Krause is the founder of Scrub Daddy, founded in 2008. Krause had a unique source of inspiration for ‘Scrub Daddy’. Working in a factory that involved chemicals and abrasives, his hands often became greasy and dirty. This led him to create the concept of the Scrub Daddy sponge to clean his hands. After experimenting with different materials, he eventually found the right combination and the Scrub Daddy was born.

Aaron Krause is a successful American entrepreneur with a net worth of $70 million as of 2023. Krause made this hefty amount through his successful venture, ” Scrub Daddy Inc.”

Aaron Krause, born February 1, 1969, in Wynnewood, Pennsylvania, was driven to discover and invest in things from a young age. His parents, a paediatrician mother and a cardiac surgeon father, Robert Krause, significantly influenced his life.

After graduating from Syracuse University with a degree in psychology, Krause attributed his success in business, particularly with Scrub Daddy, to the knowledge he had gained from his college years. He recognized the importance of psychology in the business world.

With over 25 years of experience in patenting and producing pioneering products, Aaron has proven himself a successful entrepreneur. His creations have made their way into many well-known big-box stores, and large corporations have even acquired him, like the 3M Company.

Aaron earned his degree from Syracuse University in psychology, although he found his calling in the car detailing trade. This inspired him to create a double-sided buffing pad, which he patented and then evolved further. Determined to use his skills to solve problems through invention, Aaron was eventually approached by 3M, who, after lengthy negotiations, acquired his business in 2008.

Aaron’s fame escalated when he appeared on the popular ABC show Shark Tank to showcase his invention – the Scrub Daddy scrubbing sponge boasting a smiley face. His presentation was a success, and he subsequently secured an investment from the renowned inventor and celebrity entrepreneur Lori Greiner.

As a result of the partnership, Aaron and Lori have sold millions of these cheerful sponges to major retailers such as QVC, Bed Bath & Beyond, Walmart, Target, Kroger, Home Depot, Lowe’s, Ace Hardware, Giant, Walgreens and Amazon.

Scrub Daddy has been making strides since their appearance on Shark Tank, achieving $200 Million in retail sales and worldwide acclaim. The Wall Street Journal has even featured the company in its coverage of the half-billion-dollar sponge market.

2014 was a massive year for them, as they were named the “Most Successful Product” in Shark Tank’s history, a title they still hold today. Their product line has grown exponentially and is now available internationally.

In 2016, Aaron was honoured with Ernst & Young’s Entrepreneur of the Year Award for the Greater Philadelphia area. His company, Scrub Daddy Inc., was selected as one of the Philadelphia Business Journal’s Best Places to Work. Aaron then partnered with Carbon Sports LLC to create Tovi Hockey, a revolutionary hockey stick that will revolutionize the game. His latest invention, a patented battery-charging belt, was developed in partnership with UK-based Nifty.

Additionally, Aaron has started four new companies, is a manufacturing consultant and often appears on QVC. His inventions have been featured in The Philadelphia Inquirer and on popular TV shows such as Good Morning America, The View, CNBC Squawk Box, ABC News, New York Live, and ABC’s Shark and Beyond the Tank.

Aaron Krause and Stephanie Krause have been together since 2010. Stephanie works as the communications department head for Krause’s business. Krause is the proud parent of twins; a son, Bryce Krause, and a daughter, Sophie Krause.

As Aaron is a private person and isn’t interested in sharing his personal life with the media, there is no further information available regarding his family and siblings.

As we thoroughly discussed above, Aaron Krause founded Scrub Daddy in 2008. Scrub Daddy Inc’s breakthrough happened when Krause appeared in the 4th season of Shark Tank to raise an investment of $100,000 with an equity of 10% in the company. Aaron’s pitch impressed the Sharks, and Lori Greiner immediately offered $200,000 with 20% equity in the company, which Krause accepted happily.

As of 2023, Scrub Daddy’s net worth is $250 million, while its founder, Aaron Krause, net worth is $70 million. Krause made “Scrub Daddy Inc” a massive success with his sheer hard work and with the guidance of Lori Greiner, who is also a 20% stakeholder in the company. Right now, Scrub Daddy Inc.’s annual revenue is $175 million.

How much is Scrub Daddy net worth?

Who is the founder of Scrub Daddy?

Aaron Krause is the founder of Scrub Daddy, who founded it in 2008.

How much is Aaron Krause’s net worth?

How old is Aaron Krause?